With the rise in popularity of 300 Blackout, more mainstream shooters are turning to this purpose driven caliber. We are finding out more and more that with this specific cartridge people are not necessarily shooting the correct load for their firearm. We want to address some of the issues that we have come across as an ammunition manufacture.

There are two main reasons that the 300 Blackout round was created. The first reason was to replicate the ballistics of a 7.62x39 in an AR platform. The second reason was to build a cartridge around an existing platform (AR Design) which could replace the MP5-SD. The purpose of this was to create a gun the size of a submachine gun, but with more versatility and capability.

Keeping those two points in mind, there is not necessarily a “one size fits all” round for this purpose driven gun. There are generally two ways to go when setting up this gun and choosing your ammo. The first option is to go with a 16” barrel and shoot lighter, faster loads (Replicating the 7.62x39). The second option is having a barrel length of 7”-10”, shooting a heavier projectile which in result makes it more suppressor friendly. Going with one of these two choices is going to maximize the potential of your desired build.

The military sought after a design making it possible to have a gun perfect for CQC, and at the change of a magazine be able to reach out to longer distances. Subsequently a shorter barrel design was the weapon of choice for special forces. Many gun owners new to this caliber are starting to mix and match both designs, which is varying the performance that it was initially intended for 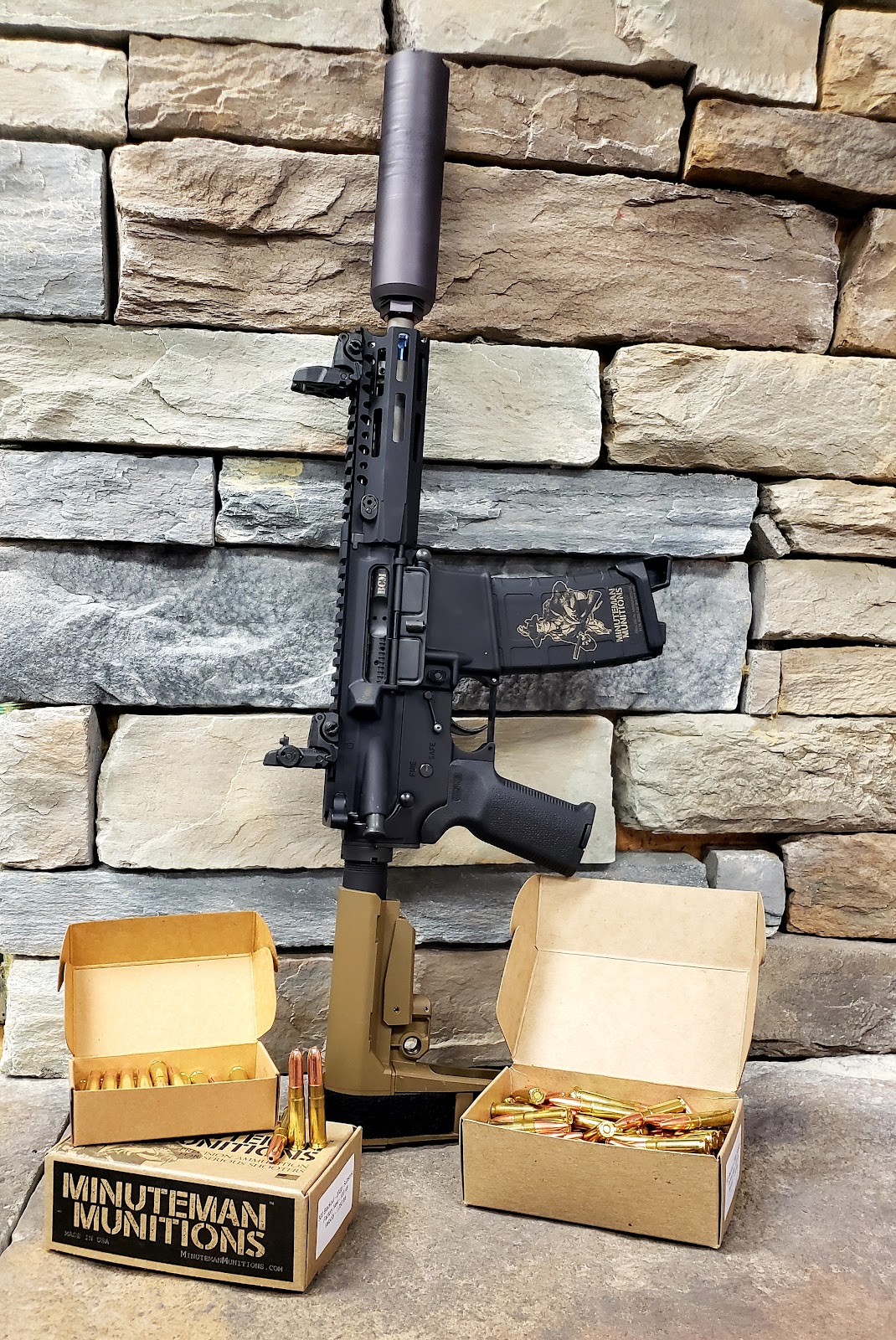 At Minuteman Munitions we specifically designed our 300 Blackout rounds to be used in a 7”-11” barrel. We wanted to maximize the amount of energy out of short barrels while staying well under transonic speeds. This lead us to a 1,050 ft/s target with an 8.5” barrel. This ensures a more complete powder burn for people using a shorter barrel. The only downside is that from a 16” gun you will not be subsonic.

We have noticed that most manufactures are designing their 300 Blackout load based on 16” barrels. Doing this is an attempt at making a “universal round” that works for all barrel lengths, when in fact this only neuters the capabilities of this cartridge. What this means is that the majority of manufactures are designing this round to have a velocity of 1,050 out of a 16” barrel. If you were to use that same ammunition in an 8” barrel, you will have significantly less muzzle velocity leading to a whole host of issues, not limited to but including, short stroking of the gun, dirty powder burn, and significantly decreased accuracy.

All of this information holds true if your gun is built correctly; we will be discussing the different types of builds specifically for 300BLK in the next installment of Ballistic Theory. From all of us here at Minuteman Munitions, we want to make sure all of our customers are well informed to make the correct decisions for their guns and training needs. If you ever have any questions please feel free to reach out to us anytime.